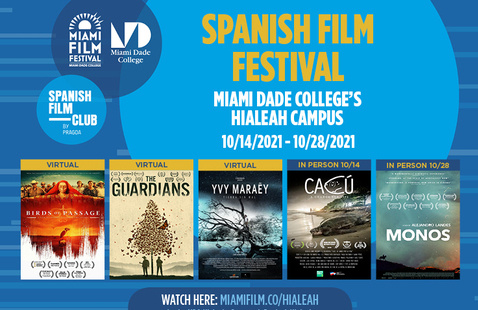 BIRDS OF PASSAGE (PAJAROS DE VERANO) (2018)
Directed by Ciro Guerra & Cristina Gallego | Colombia
During the marijuana bonanza, a violent decade that saw the origins of drug trafficking in Colombia, Rapayet and his indigenous family get involved in a war to control the business that ends up destroying their lives and their culture.

THE GUARDIANS (2018)
Directed by Ben Crosbie, Tessa Moran | Mexico
An indigenous Mexican community and millions of monarch butterflies are under threat of extinction in the ancient forest they call home.

YVY MARAEY, LAND WITHOUT EVIL (2014)
Directed by Juan Carlos Valdivia | Bolivia
A Bolivian filmmaker and a Guaraní Indian travel together through the forests of southeastern Bolivia to make a film about the Guaraní people.