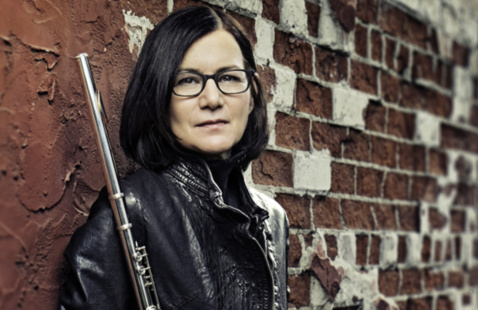 Flutist and composer Jamie Baum has toured
the U.S. and performed in more than 35
countries at major festivals, jazz venues and
concert halls. As a bandleader, her six CDs have received
critical praise, many of which garnered
four stars from DownBeat magazine and
made “Best CDs of the Year” lists. Baum has
placed in DownBeat Critics Polls annually
since 1998, was included in the Huffington
Post’s “25 Great Jazz Flute Performances,”
and has appeared in several other
prominent polls including the JazzTimes and
NPR Critics polls. She was nominated 11
times by the Jazz Journalists Association for
“Flutist of the Year,” and her band, The Jamie
Baum Septet+, was nominated in 2014 as
“Best Midsize Ensemble of the Year.”
Baum has been recognized for composing
by the Guggenheim Foundation, the
Foundation for Contemporary Arts and
the International Society of Jazz Arrangers
and Composers. In addition to leading the Septet+ band,
Short Stories band and co-leading Yard
Byard: The Jaki Byard Project, Baum is
on the faculty at the Manhattan School of
Music. She has also worked as a clinician
for 26 years at Altus Flutes/KHS America,
which sponsors her innovative workshops.