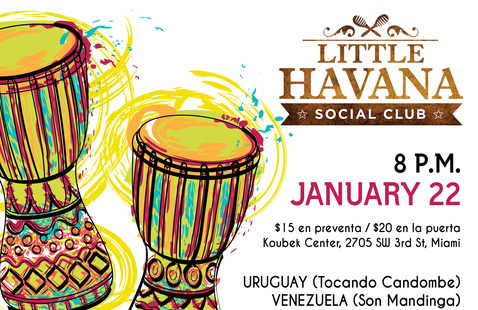 Little Havana Social Club channels the spirit of a fiesta de barrio (neighborhood party), informed by the many sounds and flavors of Latin American and Caribbean traditions but with a twist of contemporary Miami. This edition of LHSC is a journey through Latin American and African cultures as seen through percussion, and more specifically the influence of the African drum on the variety of rhythms found in the American continent. A musical journey through Uruguay with its Candombe, Cuba with its Bata, Haiti with its Rara, Venezuela with its Culo e’ Puya and Africa with its Doum Doum and Djembe.
Live performances by:
TOCANDO CANDOMBE a style of music and dance that originated in Uruguay among the descendants of liberated African slaves, and that features three different drums: chico, repique, and piano drums