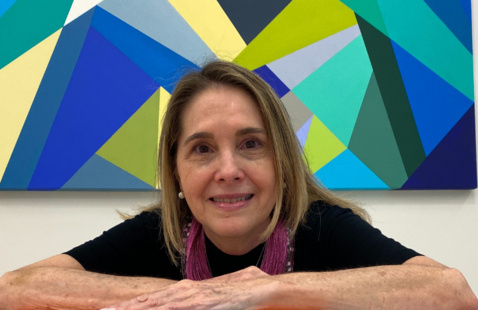 and photography. She grew up in Caracas, her hometown, surrounded by a colorful tropical

atmosphere, to which she owes her early inclination to vivid colors which, later would emerge in

her inclination for arts.

She studied Commercial Art at the Endicott College, Beverly Massachusetts, where her

plastic sensitivity. Upon returning to Venezuela, she studied environmental design at the

Briceño, Adrian Pujol and Asdrúbal Colmenares, as well as specialized painting classes and

in photography comes from the Roberto Mata workshop in Caracas. (RMTF)

Her first paintings fall into the gestural trend. ln them, the color stains referred to the vegetation

world, resembling rapprochements to flowers and leaves. Later, she ventured into digital art,

Her love for photography became a pivot throughout her work, even supporting the abstract-

geometric expression of her current paintings. Her references come from images taken from

the daily environment, from the urban landscape, from architecture traffic and fragments from

nature that after a process of transformation and simplification, become basic shape lines and

Her exhibition activity started in 2001 but intensified in 2009; period in which she began to show

her work at collective exhibitions and tarried out her first solos" ln 2013, she intervened a wide

Hospital), and the following year intervened with her photographic work the Caracas' Altamira

After establishing a residence in Miami in 2At7, the artist began a more in-depth research about

the abstract-geometric language; which she uses as a means to perceive, think and interpret

reality, and to give an aesthetic sense to her subjectivity and memory.

. She has also shown her work individually in Miami and Caracas. ln 2019, she created the