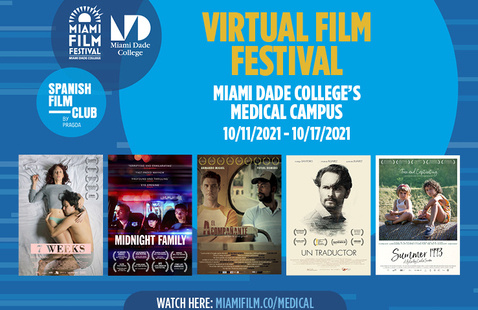 Medical Campus has curated a virtual program from October 11-17th that appropriately tie into the campus’s trade including films on First Responders, Medicine, Ethics, HIV, and Caretakers.

FILMS:
THE COMPANION (EL ACOMPAÑANTE) (2015)
Directed by Pavel Giroud | Cuba
A disgraced boxer gradually forms an unlikely friendship with an HIV positive patient he is tasked with monitoring at a military-run sanitarium in 1980s Cuba.

SUMMER 1993
Directed by Carla Simón/ Spain
In the summer of 1993, following the death of her parents to AIDS, six-year-old Frida is forced from bustling Barcelona to the Catalan provinces to live with her aunt and uncle, her new legal guardians. Country life is a challenge: aside from the emotional upheaval, the nature that surrounds her is mysterious, if not dangerous. But it is the source of her parents’ passing that casts a shadow over how she is treated by the local community.

UN TRADUCTOR (2018)
Directed by Rodrigo Barriuso | Cuba
A Russian Literature professor at the University of Havana is ordered to work as a translator for child victims of the Chernobyl nuclear disaster when they are sent to Cuba for medical treatment.

7 WEEKS (2016)
Directed by Constanza Figari | Chile
Camila, a young college student, finds out she is pregnant. Despite the full support of her partner and family, Camila, unwilling to become a mother, decides to end her pregnancy, causing the anger and rejection of her loved ones, having to walk the path of early termination alone, in a country where abortion is illegal.