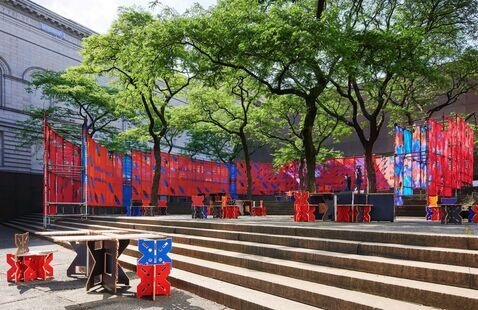 The Museum of Art and Design (MOAD) at Miami Dade College (MDC) presents Estuary [Pavilion for MOAD], a work by Cuban American artist Rafael Domenech, opening Friday, Nov. 18, during the 39th Miami Book Fair at MDC Wolfson Campus in downtown Miami. The exhibition will remain on view through January 2023.

Commissioned by MOAD, it functions on multiple levels—as a public sculpture, a reflection on the written word, a platform for live performances and public gatherings, and a meditative environment. It is made from everyday construction materials, such as aluminum framing, and can mutate into a variety of distinct spatial configurations. Large panels or “pages” of construction mesh feature laser-cut texts that will change throughout the duration of the project.

Estuary will be installed at the Wolfson Campus’ Kyriakides Plaza, located between buildings 1 and 2. It will later travel to other MDC campuses. MOAD will create programming for the pavilion at each site.

Domenech earned a Bachelor of Fine Arts from the New World School of the Arts. His artistic practice investigates notions of architecture and urban design, public gathering spaces, and publishing methodologies.

Museum of Art and Design