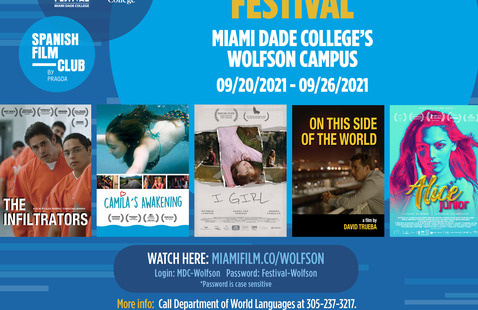 The films will be free to students, faculty, and community members, and intends to bring the very best in contemporary Latin American cinema and languages to the Miami Dade College community. The program will present five films curated by Miami Film Festival and virtual presentations will be available online with English subtitles. This event will take place during the Fall Semester as part of the Hispanic Heritage Month celebration.

The series begins with Wolfson Campus, taking place September 20th – 26th and will presents films tied to the concept of Equity, a theme set forth by Miami Dade College’s President, Madeleine Pumariega, as one of the five themes of her first 100 days as President, and part of the College’s vision moving forward.

CAMILA'S AWAKENING (EL DESPERTAR DE CAMILA) (2018)
Directed by Rosario Jimenez Gili | Chile
Camila loves swimming and doesn't know failure. However the water, that has given her success in the recent past, now leads her to the biggest setback of her life.

I GIRL (YO NIÑA) (2018)
Directed by Natural Arpajou | Argentina
A couple moves to Patagonia escaping from the impositions of modern capitalist society. But soon they will discover that not everything is so magical or so simple, nor are they prepared to deal with that life.

THE INFILTRATORS (2019)
Directed by Alex Rivera and Cristina Ibarra | United States
A rag-tag group of undocumented youth - Dreamers - deliberately get detained by Border Patrol in order to infiltrate a shadowy, for-profit detention center.

ON THIS SIDE OF THE WORLD (A ESTE LADO DEL MUNDO) (2020)
Directed by David Trueba | Spain
This drama about immigration into Europe is set in the city of Melilla, a Spanish possession in Africa on the border with Morocco.