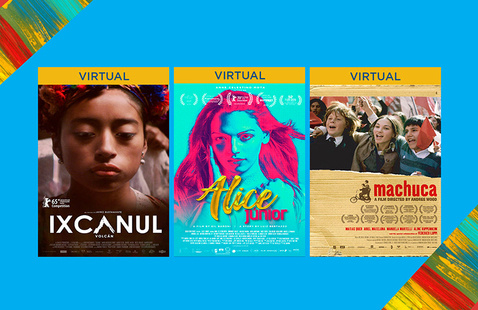 The Spanish Film Club series was made possible with the support of Pragda, SPAIN arts & culture, and the Secretary of State for Culture of Spain.

IXCANUL
Guatemala’s Official Submission to the 2015 Academy Awards
Jayro Bustamante is a mesmerizing fusion of fact and fable, a dreamlike depiction of the daily lives of Kaqchikel-speaking Mayans on a coffee plantation at the base of an active volcano. Immersing us in its characters’ customs and beliefs, Ixcanul chronicles with unblinking realism, a disappearing tradition, and a disappearing people. A snakebite forces them to leave immediately in search of a hospital. The modern world Maria has so dreamt about will save her life, but at what price?

MACHUCA
Chile’s Official Submission to the 2005 Academy Awards
The story takes place in Santiago in 1973 in the days leading up to the military coup and is based on a real experiment carried out during the socialist government of Salvador Allende at Saint George’s College. The headmaster, Father McEnroe, brings a new group of children to the establishment, all of them being from the popular class, to educate them without discrimination. McEnroe attempts to promote mutual respect among students from different social classes.

ALICE JUNIOR
Brazil
Alice Júnior is a carefree, spoiled trans YouTuber with everything she could ask for: an apartment in a cool beach town, a loving dad, her own advice vlog, an almost-win on Teen Top Model, and a cat named Rhinoceros. So, when her father announces their move from the vibrant Brazilian city of Recife to a small, conservative town in the south, to an old-fashioned catholic school, Alice has to prepare herself for the prudery and small-mindedness she will confront there. The teenager, however, doesn’t let the initial hostility get her down. Alice releases her truest survival instinct to make her new schoolmates and teachers rethink their conservative ways and catch her long-overdue first kiss: by being loud and unapologetically herself.