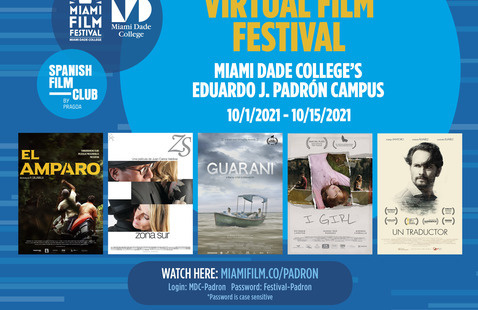 The films will be free to students, faculty, and community members, and intends to bring the very best in contemporary Latin American cinema and languages to the Miami Dade College community. The program will present five films curated by Miami Film Festival and virtual presentations will be available online with English subtitles. This event will take place during the Fall Semester as part of the Hispanic Heritage Month celebration.

After its successful introduction this past summer, Eduardo J. Padron Campus brings back the Spanish Film Festival from October 1st to October 15th. The World Languages Department at Eduardo J. Padron Campus will bring back UN TRADUCTOR from its Summer 2021 screening series and present four new films from across Latin America surrounding the theme of Community Building.

EL AMPARO (2016)
Directed by Rober Calzadilla | Venezuela
Based on the 1988 Massacre of El Amparo, where the Venezuelan army killed several fishermen. The army accuses them of being Colombian guerillas but the locals desperately try to prevent them from being taken away.

GUARANI (2016)
Directed by Luis Zorraquin | Paraguay & Argentina
Set against spectacular landscapes, this film follows a man and his granddaughter as they travel from Paraguay to Buenos Aires to convince the girl's mother to give birth in Guarani land.

I GIRL (YO NIÑA) (2018)
Directed by Natural Arpajou | Argentina
A couple moves to Patagonia escaping from the impositions of modern capitalist society. But soon they will discover that not everything is so magical or so simple, nor are they prepared to deal with that life.

UN TRADUCTOR (2018)
Directed by Rodrigo Barriuso | Cuba
A Russian Literature professor at the University of Havana is ordered to work as a translator for child victims of the Chernobyl nuclear disaster when they are sent to Cuba for medical treatment.

Department of World Languages at 305-237-6003 or visit www.mdc.edu/padron/academic-departments/esl-foreign-lang.aspx