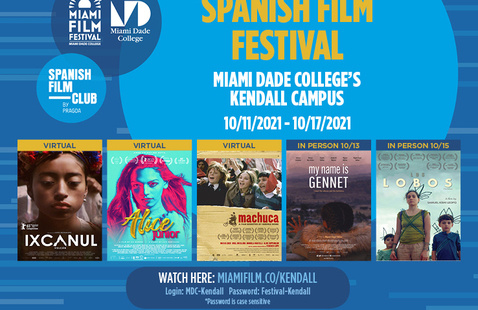 IXCANUL (2015)
Directed by Jayro Bustamante | Guatemala
On the slopes of an active volcano in Guatemala, a marriage is arranged for seventeen-year-old María by her Kaqchikel parents.

MACHUCA (2004)
Directed by Andrés Wood | Chile
Two 12-year-old Chilean children from different social classes become friends in 1973. They both discover each other's world as political tensions in their country increase.

MY NAME IS GENNET (MI NOMBRE ES GENNET) (2019)
In-person screening October 13th [TIME & Date] RSVP HERE [LINK]
Directed by Miguel Angél Tobías | Spain
Based on a true story, this poignant and inspirational film follows the life of Gennet Corcuera, from her childhood in extreme poverty in Ethiopia to her achievement as the first Deaf-blind woman to obtain a university degree in Europe.

LOS LOBOS (2019)
In-person screening October 15th [TIME & LOCATION] RSVP HERE [LINK]
Directed by Samuel Kishi Leopo | Mexico
Two children emigrate to the US with their mother. Their days pass in a tiny flat waiting for her to come back as they hold on to the hope of visiting Disneyworld.