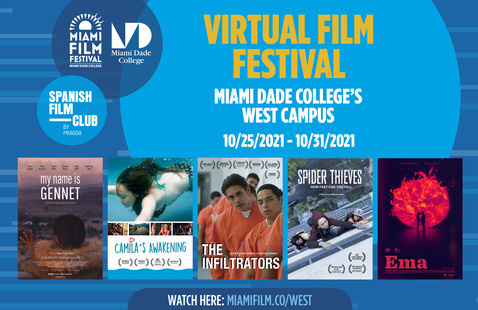 The series concludes with West Campus, October 25th-31st. The campus presents films tied to the concept of Equity, a theme set forth by Miami Dade College’s President, Madeleine Pumariega, as one of the five themes of her first 100 days as President, and part of the College’s vision moving forward.

CAMILA'S AWAKENING (EL DESPERTAR DE CAMILA) (2018)
Directed by Rosario Jimenez Gili | Chile
Camila loves swimming and doesn't know failure. However the water, that has given her success in the recent past, now leads her to the biggest setback of her life.

EMA (2019)
Directed by Pablo Larraín | Chile
A couple deals with the aftermath of an adoption that goes awry as their household falls apart.

THE INFILTRATORS (2019)
Directed by Alex Rivera and Cristina Ibarra | United States
A rag-tag group of undocumented youth - Dreamers - deliberately get detained by Border Patrol in order to infiltrate a shadowy, for-profit detention center.

MY NAME IS GENNET (MI NOMBRE ES GENNET) (2019)
Directed by Miguel Angél Tobías | Spain
Based on a true story, this poignant and inspirational film follows the life of Gennet Corcuera, from her childhood in extreme poverty in Ethiopia to her achievement as the first Deaf-blind woman to obtain a university degree in Europe.

SPIDER THIEVES (NIÑAS ARAÑAS) (2017)
Directed by Guillermo Helo | Chile
Avi, Cindy and Estefany, 13 years old, are three young girls who live in an illegal land grab. They form a band accustomed to small robberies. One day, they decide to rob apartments by climbing the balcony.