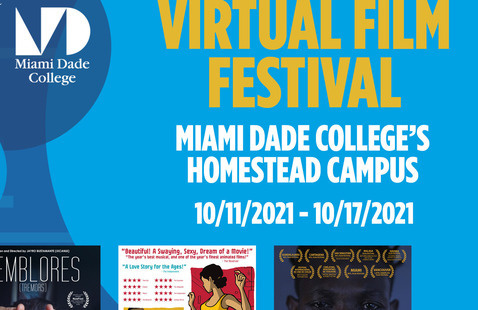 This event is a collaboration between Miami Film Festival, MDC’s Cultural Affairs, the Homestead Campus and Pragda’s Spanish Film Club.

The Homestead Campus is excited to offer MDC students a program of five Ibero-American films specifically curated by Miami Film Festival with Spanish Film Club by Pragda that focus on the Cuban, LGBTQ+, and Afro-Iberian experience. Students and faculty can view the films free online. All films feature English subtitles.

Contact a member of the Homestead Campus Hispanic Heritage Month Committee at (305) 237-5021 for more information.

FILMS:
CHICO & RITA (2010)
Directed by Fernando Trueba, Javier Mariscal, Tono Errando | Spain
Chico is a young piano player with big dreams. Rita is a beautiful singer with an extraordinary voice. Music and romantic desire unites them, but their journey - in the tradition of the Latin ballad, the bolero - brings heartache and torment

THE COMPANION (EL ACOMPAÑANTE) (2015)
Directed by Pavel Giroud | Cuba
A disgraced boxer gradually forms an unlikely friendship with an HIV positive patient he is tasked with monitoring at a military-run sanitarium in 1980s Cuba.

LA YUMA  (2009)
Directed by Florence Jaugey | Nicaragua
This is the story of Yuma a strong-willed and rebellious girl from the poor neighborhoods of Managua who dreams of being a boxer.

PERRO BOMBA (2019)
Directed by Juan Cáceres | Chile
After a fight with his boss, Steevens, a young Haitian immigrant in Santiago, Chile, loses his job and is repudiated by the entire community.

TREMORS (TEMBLORES) (2019)
Directed by Jayro Bustamante | Guatemala
The coming out of an evangelical father shatters his family, his community and uncovers a profoundly repressive society.